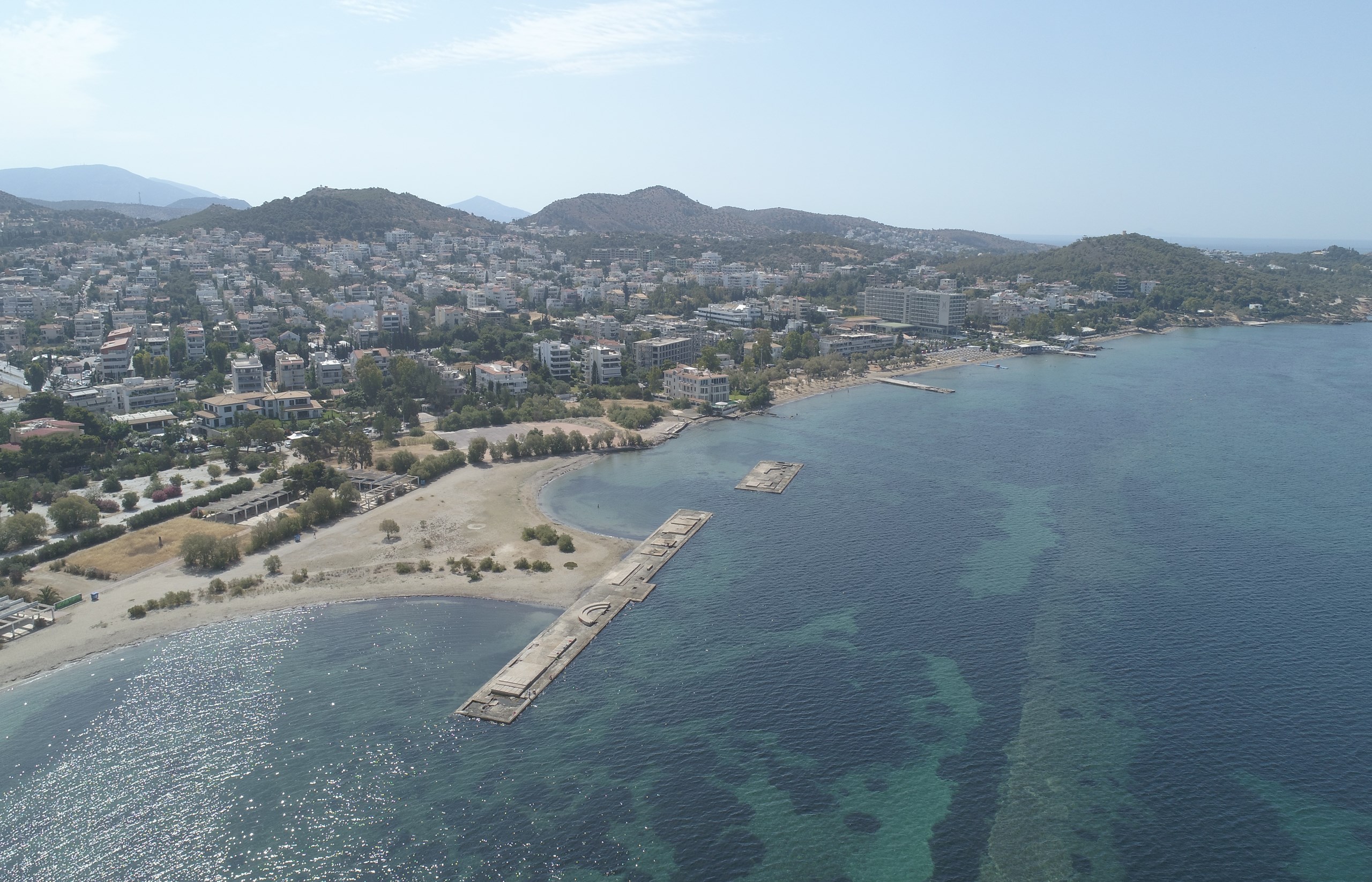 For second consecutive year, Polygreen and Nestlé Hellas join their forces with the Vari-Voula-Vouliagmeni local community, to remove 2.7 tons of waste from the marine ecosystem across the Athens Riviera 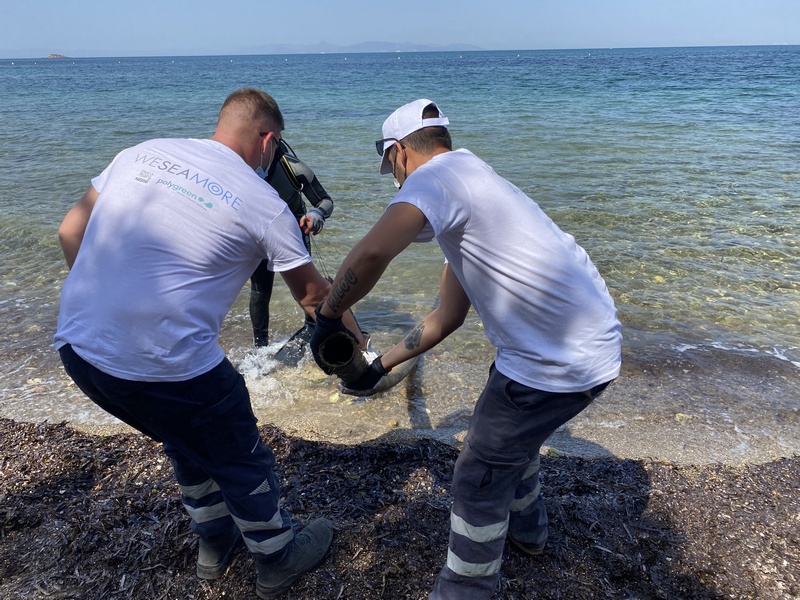 Athens, June 29, 2021 – WESEAMORE II, Polygreen's and Nestlé Hellas' pioneering program, was successfully implemented for the second consecutive year at the marine and coastal environment of Agios Nikolaos ("Mikro Kavouri") and Voula's Second Beach, in Athens. The municipality of Vari-Voula-Vouliagmeni invited beachgoers and community members to participate in a voluntary cleanup initiative, and the response was indeed wholehearted. Leveraging innovative technologies for detecting, mapping and collecting litters from the marine environment, expertized personnel and volunteers managed to remove 2.7 tons of beach waste from the Athens Riviera in just five days.

On the occasion of World Environment Day 2021, WESEAMORE ΙΙ was scheduled for the first two weeks of June.  The waste management process is expected to have been completed by early July. The aim of this initiative was first, to use innovative waste mapping technologies on the coastline, seabed and surface of the sea, and then to collect, short and recycle the waste. The Aegean's University Department of Marine Studies, Ucan Drone and Divers' World were present throughout the entire activity, and their contribution in the successful implementation was invaluable.

The collection of waste on shore, was carried out by the expertized personnel of Polygreen, along with volunteers from Nestlé Hellas, Polygreen and the local community.  On the seabed, the experienced divers of “Divers’ World”, accompanied by Polygreen’s staff, removed the waste that had been marked on maps through the mapping process. All together managed to remove 2,718 kg. marine litters. Plastic, Fabric and Scrap Waste (aluminum & metal) accounted for 39%, 17 % and 16% of the total, respectively.

It is worth noting that the largest quantity of seabed waste was collected within a range of fifty meters from the coastline.  Cutting edge technologies, such as remote-sensing drones and applications, were used in all cleanup activities, a clear indication of their true potential in combating marine pollution and in implementing circular economy solutions. The litters were collected on a daily basis at a specially designed sorting point where Polygreen’s staff separated them into predetermined streams. All waste was repacked into specialized UN certified packaging media (FIBCs - Big Bags) and transferred to Polyeco's - a Polygreen partner- licensed facilities for further treatment and recovery. 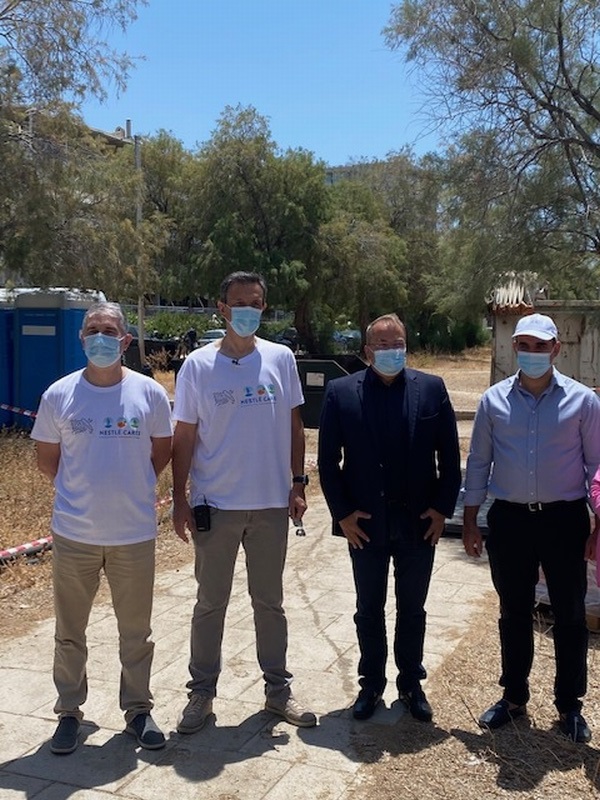 Mr. Athanasios Polychronopoulos, Polygreen's founder and CEO, stated: "For the second year in a row, we showcased how much we can achieve through quality partnerships. In the quest for environmental sustainability, we are all in the same team. Through WESEAMORE initiative, we sensitize the local communities and familiarize them with the concepts of circular economy, while we showcase in practical terms that nothing is really in excess and that everything can be processed into something useful. At Polygreen we have the know-how to implement of our vision: a zero-waste world. We aspire to see Greece leapfrog towards a green transition, and we commit to do everything we can to that end".

In his comment, Nick Emmanouilidis, Chief Executive Officer at Nestlé Hellas, said: "A truly pioneering program, WESEAMORE highlights the need for collaboration as a powerful way to tackle modern challenges such as marine plastic pollution.  Leveraging on academic research and cutting edge technology, we seek to find innovative solutions that promote sustainability across the Hellenic seas. This WESEAMORE initiative includes all the major aspects of our philosophy: innovation, collaboration, respect for humans, for local communities and for the planet. At Nestlé, driven by our commitment to sustainable development, we use our impact, our insight and our leverage to promote real changes that would make a difference".

The Mayor of Vari-Voula-Vouliagmeni, Grigoris Konstantellos, added: "The partnership of the city of Vari-Voula-Vouliagmeni with Polygreen and Nestlé, both leaders in their field, resulted in removing 3 tons of marine litters which, subsequently, will be properly treated and re-used. These actions are truly important in terms of real sustainability and circular economy goals, and add significant value to our partnership with the private sector. We congratulate Polygreen and Nestlé for their initiative and look forward to welcoming them to our beautiful city next year as well." 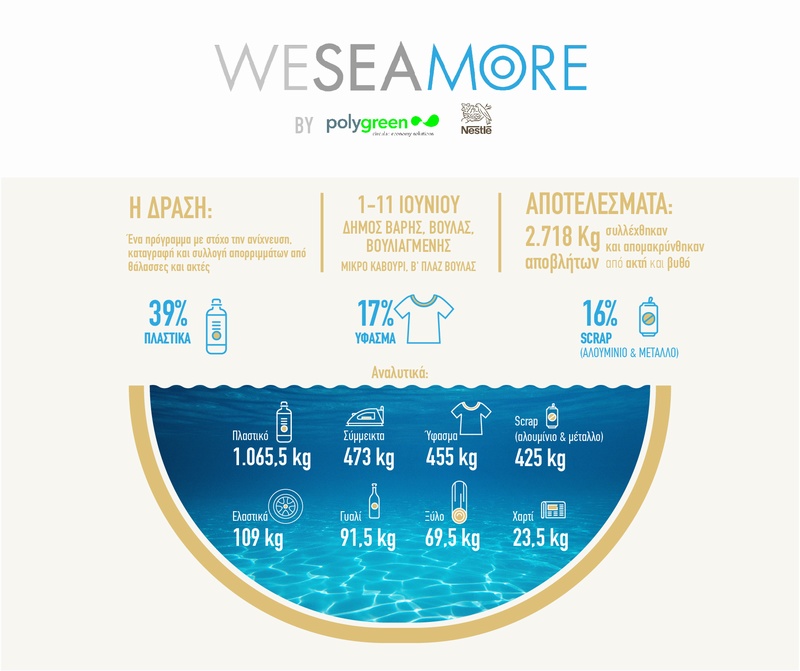 It is worth noting that these coasts attract thousands of people throughout the year and their ecological footprint increases continuously.

Volunteers from the Hellenic Rescue Team Attica were present during the entire cleanup activity, to offer first-aid in case of accidents or emergency. Also, as a measure to further protect public health, an EODY unit was present to perform Covid-19 rapid tests free of charge to the volunteers.