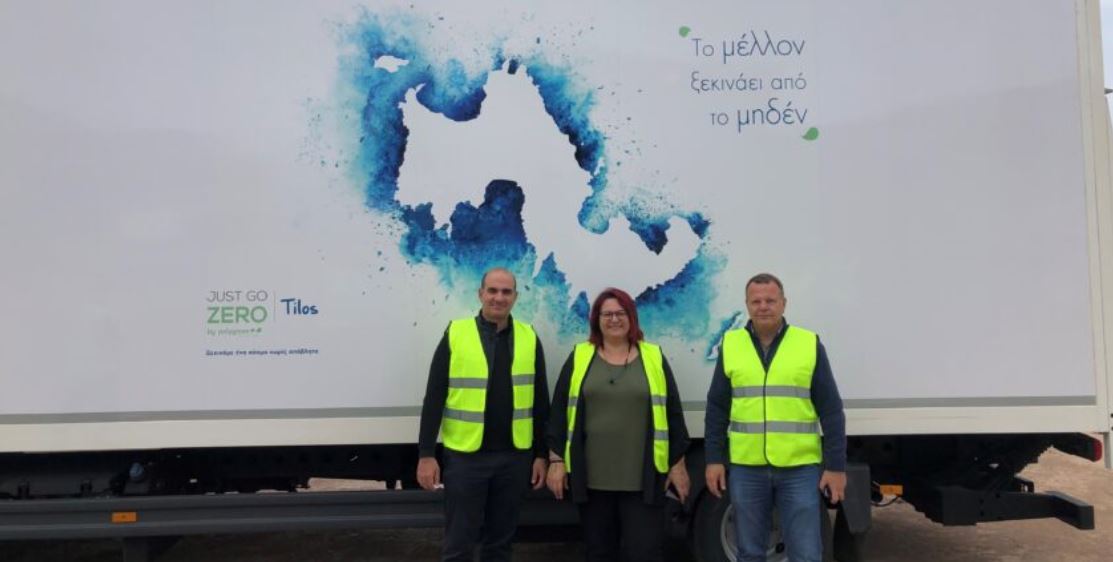 With a big celebration of circular economy, Tilos set off on an exciting journey towards a world without waste
Creative workshops were run by Fereniki Tsamparli for crafting Christmas ornaments and by Alexandra Diona for recycling old fabrics, while Chef Dimitris Skarmoutsos held a special seminar on the avoidance of food waste

Tilos, December 2, 2021: A big celebration of circular economy for the inhabitants of Tilos was organized on Saturday, November 27 by Polygreen. The participants attended creative recycling workshops, in which they gave a second life to materials that, until then, were intended for waste, getting to experience in practice the importance of reusing what we no longer need.

The first workshop was held by Fereniki Tsabarli with the theme of making Christmas ornaments out of recyclable materials and then Alexandra Diona shared creative ways of utilizing old fabrics. In the afternoon of the same day, well-known Chef Dimitris Skarmoutsos ran a special cooking workshop themed around the avoidance of food waste.

The celebration marked the launch of the innovative circular economy project "Just Go Zero Tilos", which aims to transform Tilos in the Dodecanese into the first zero waste island and is expected to be completed in the first months of 2022. The project is funded and fully supported by Polygreen’s technology and know-how and is implemented in collaboration with the Municipality of Tilos.

The workshops that took place were designed to entertain the island’s locals while also educating them on the practices of the Just Go Zero Tilos initiative, with the ultimate goal of encouraging their active participation in the effort to transfer the island into a waste-free future.

The events were concluded with an open discussion in which the Mayor of Tilos Mrs. Maria Kamma Aliferi, the local Deputy Regional Governor of Dodecanese, Mr. Christos Efstratiou and the Founder and CEO of Polygreen, Mr. Athanasios Polychronos addressed the public.

Ms. Maria Kamma Aliferi said: "Today we are starting on a journey towards reaching the ambitious yet extremely important goal of becoming a zero-waste island. This transition relies on our collective commitment to a new daily practice facilitated by the support and know-how of Polygreen. Our collaboration with Polygreen sets a new example of a public-private partnership in which the active participation of citizens magnifies the outcome of reaching environmental innovation ".

Mr. Athanasios Polychronopoulos said: "We are proud that our vision for a world without waste has found fertile ground in Tilos for its growth, and of a very active local community eager to support innovation and embrace change. Today we are embarking on an exciting transition journey in Tilos and a new way of being that we hope will encourage similar initiatives in Greece and abroad."

Just Go Zero Tilos fosters a technologically advanced, innovative system of circular management of all waste streams generated on Tilos with the aim of its complete utilization. It is implemented with the active participation of households, businesses and organizations on the island and is expected to be completed in the Spring of 2022.